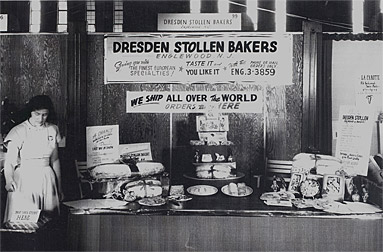 Irmgard Maron at a holiday market circa 1945
The founder of Dresden Stollen Bakers, Irmgard Cecilie Maron Feldon, lost her battle with cancer on May 24, 2007 with her family by her side. She was born on July 1st, 1916 in Dresden, Germany. Because of their Jewish ancestry, the Maron family was forced to flee Germany in 1938, ultimately settling across the globe, in places such as Brazil, Israel, and the United States. Irmgard and her mother arrived in New York, and settled in Englewood, NJ, where Irmgard started Dresden Stollen Bakers. She ran the business for 54 years, until passing on the torch to her niece, Sallie Maron, in 1992. Irmgard and her husband, Gerald Feldon, married in 1948. They raised their daughter, Annette, in Demarest, NJ, where Irmgard was very active in the American Cancer Society, Civic Music, Little Theatre Group and many others.

In 1979, Irmgard and Gerry discovered and fell in love with Carmel Valley. They returned to New Jersey long enough to pack up and say goodbye. The two settled in quickly, with Irmgard becoming quite involved with the community. She was a member of the Carmel Valley Community Chapel, Carmel Valley Garden Club, Women's Club, Hidden Valley and Monterey Bay Aquarium, as well as an avid bridge player who played regularly with friends until just weeks before her passing. 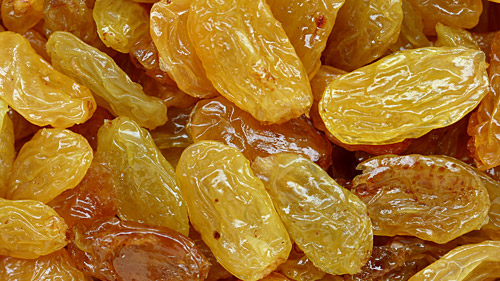 What makes our stollen so delicious?
Click here to find out 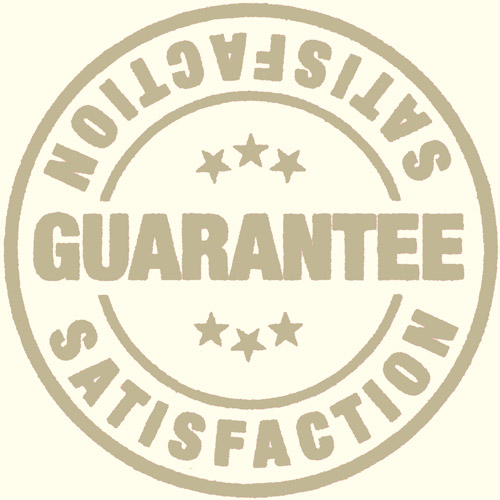 We GUARANTEE you'll love our delicious stollen
More Details
"I have been ordering this wonderful Dresden Stollen for 20 years... it is the best. Everyone loves this gift!"
~ Jill, California
"It was better than any we recall during the four years we lived in Germany."
~ Ron & Margaret, Louisiana
"We were so very pleased with the stollen...it surpassed all other stollen we've ever tasted!"
~ Jennifer, Michigan
"I can't tell you how much a part of Christmas you have become for my family. Thanks and Regards."
~ Richard, New York
"Just wanted to thank you for an amazingly good stollen... Wonderful!"
~ Fred, Minnesota
"I just opened my first box of your stollen -- IT IS WONDERFUL!!!!"
~ Ingrid, North Carolina
"We love your Dresdener Stollen. Reminds of our home in Weisbaden. Thank you for keeping up the tradition!"
~ Melissa, Florida
"We have had rave reviews from all to whom we gave stollen -- and we think it only gets better each year!"
~ Nancy, Massachusetts
"What would Christmas be without Dresden Stollen. I am always looking forward to this wonderful tradition."
~ Walter, Vermont
"I love this bread so so much -- getting it only once a year is killing me! LOL"
~ John, California
"This stuff is to die for. I know my uncles will love it too. Thank you very much."
~ Merilyn, Texas
"My boss received this as a gift and it is delicious. Great job!!! I will definitely order my own..."
~ Juddith, North Carolina
"Your stollen is so fresh and delicious... Happy Holidays and Aloha From Hawaii!!"
~ T.S., Hawaii
"Going on 72 years of having stollen from the Maron family... Without stollen there is no Christmas!"
~ Beatrice, Vermont
"Your Stollen are the BEST!!"
~ Robert, Florida
"I tasted your stollen... It's the best I ever had... Do you have any more to ship out?"
~ James, New York
More compliments
© 2022 Dresden Stollen Bakers LLC.  All rights reserved.     Privacy Policy  |  Site Map  |  866.STOLLEN (866.786.5536)
© 2022 Dresden Stollen Bakers LLC.
All rights reserved.
Privacy Policy  |  Site Map
|
866.STOLLEN (866.786.5536)